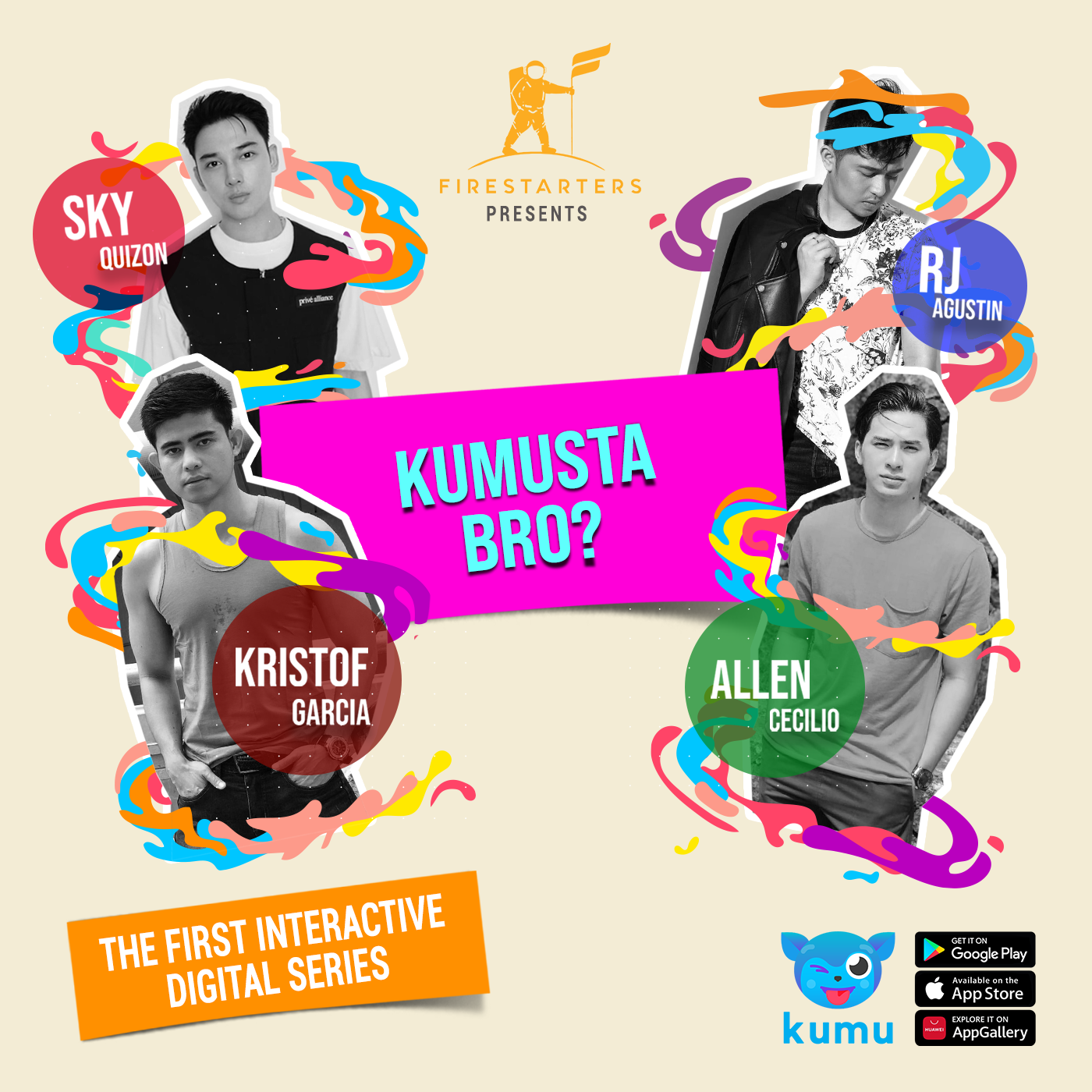 Posted at 09:07h in BL series, Series by Firestarters Production

Firestarters Productions and Kumu join forces to release the first ever interactive digital series this July. Starring PBB Otso alumni, Sky Quizon, and It’s Show Time Bidaman Kristof Garcia, “Kumusta Bro?” is a weekly digital series that can be viewed live via the Kumu app through mobile devices. Streamed live straight from the houses of the actors, “Kumusta Bro?” is about old friends who get reunited through the live stream app, together with the audience, the boys rediscover how it is to fall in love online.

“Kumusta Bro?” is a unique digital content for many reasons—one, it is the first live series where the audience can interact with the characters of the story; two, the audience has the power to help shape the story, and; three, it is the first ever series to use a live stream app as the main platform. This will definitely give an out-of-the-ordinary experience to audiences, specially BL fans. BL or Boys Love is an emerging fiction genre in Asia where the lead characters are boys or men who are entangled in romance.

Online fans have been clamoring for Sky Quizon to star in BL series because of his stark resemblance with the Thai actor Win Opas-iamkajorn also known as Tine in the hit digital series, “2gether The Series”. Kumu and Firestarters are granting those wishes as Sky Quizon will be the lead star of “Kumusta Bro?” together with It’s Showtime Bidaman, Kristof Garcia. Also joining the cast are actor and singer RJ Agustin and commercial model Allen Cecilio.

The series is an original creation of TV and film director, Real Florido who is known for his award-winning film 1ST KO Si 3rd and his original digital series Ampalaya Chronicles on iWant under Firestarters Productions. He teams up with TV writer Wiro Michael Ladera, who is also one of the biggest BL fans in the Philippines, for the script.

“Kumusta Bro?” will be available live through Kumu all over the world. A re-run of the livestream can also be seen via Firestarters Studios on Youtube. Watch out for this exciting romantic experience where you are part of the love story: KUMUSTA BRO? Kasama Ka Sa Kwento at Kilig. Download Kumu app on your devices, subscribe to Firestarters Studios on Youtube today.  Use #KumustaBro on your post and follow our social media accounts on Facebook and Instagram: @firestartersprod @kumuPH