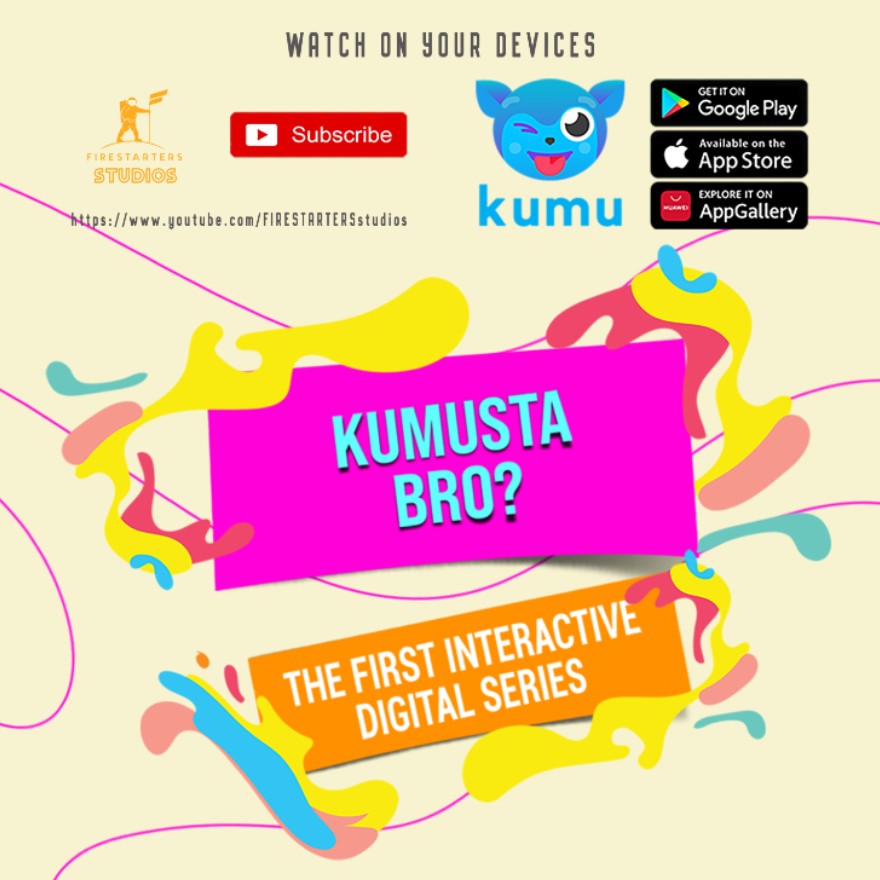 Posted at 08:50h in Uncategorized by Firestarters Production

MANILA, PHILIPPINES – When it comes to delivering entertainment, KUMU has never been content with sticking to the status quo. While the live streaming app has opened doors for networking, it has also presented endless opportunities for Filipino artists to showcase their talents by extending the limits of creativity.In the past KUMU has explored the realm of digital entertainment through its game shows and Social TV. These segments have brought hours of amusement and enjoyment straight to the screens of millions of Filipinos. However, Angelo Mendez, one of the co-founders of KUMU and head of Social TV, knows that there is still so much untapped potential.“We want filipino creators, production houses, studios to push the boundaries of what live streaming can be — and we want KUMU to be the home for this content,” he said. And while there is still a long way to go, the upcoming project, “Kumusta Bro?” is paving the way for this vision.

“Kumusta Bro?” is the first interactive boys love (BL) digital series spearheaded by KUMU and Firestarters Productions. The show is set to start on July 20, 2020, and can be viewed right on the KUMU app.

There will be an encore broadcast available on Firestarters official Youtube Account. The story follows old friends who reconnect on the live streaming app. With the help of their audience, they learn more about their friendship and how to love.Firestarters is an award-winning production company that has released critically-acclaimed films and shows, and has boasted numerous talents. Having produced successful films such as Kabisera and Iska by Theodore Boborol, as well as the television series Wattpad, Firestarters Production is ready to explore digital media by bringing their new and invigorating ideas to KUMU.

Taking charge of the livestream series is Real Florido. The accomplished director has already worked with Firestarter on the award-winning film 1st Ko Si 3rd, and the iWant series Ampalaya Chronicles. He will be joined by the seasoned GMA TV writer, Wiro Michael Ladera, who has written for  projects such as The Half Sisters, Destiny Rose, Meant To Be, The Stepdaughters and Prima Donnas.

While the crew behind the scenes already have a lot to offer to the highly anticipated feature, the on-screen gang have just as much to bring to the table.Pinoy Big Brother alumnus, Sky Quizon, will take on one of the lead roles in his portrayal of Thirdy. Alongside him will be Bidaman Kristof Garcia, who will be playing Bench. Also part of the cast is Allen Cecilio. The model and former contestant on Pinoy Boy Band will be playing Dean. RJ Agustin, who is one of the most streamed music artists from Star Music, and has appeared in Heneral Luna, Katipunan, Tadhana and starred along Nora Aunor in Kabisera, will take on the character of Cerwin.

Tune in to the official Kumusta Bro account on KUMU to watch the media press conference happening on Wednesday, July 15, at 6pm. For your fill of behind the scenes action, exclusive news and updates on the show, follow @kumuph and @firestartersprod on social media. KUMU is a powerful social media platform that brings the voices of Filipinos from all over the globe at the forefront. Aside from presenting users real-time earning opportunities as a live streamer, chances to win cash in various game shows, and engagement in campaigns, KUMU also fosters communities that ignite relevant discussions among Filipinos. Be part of the Kumunity now and download the app for free at Google Play or the App Store.