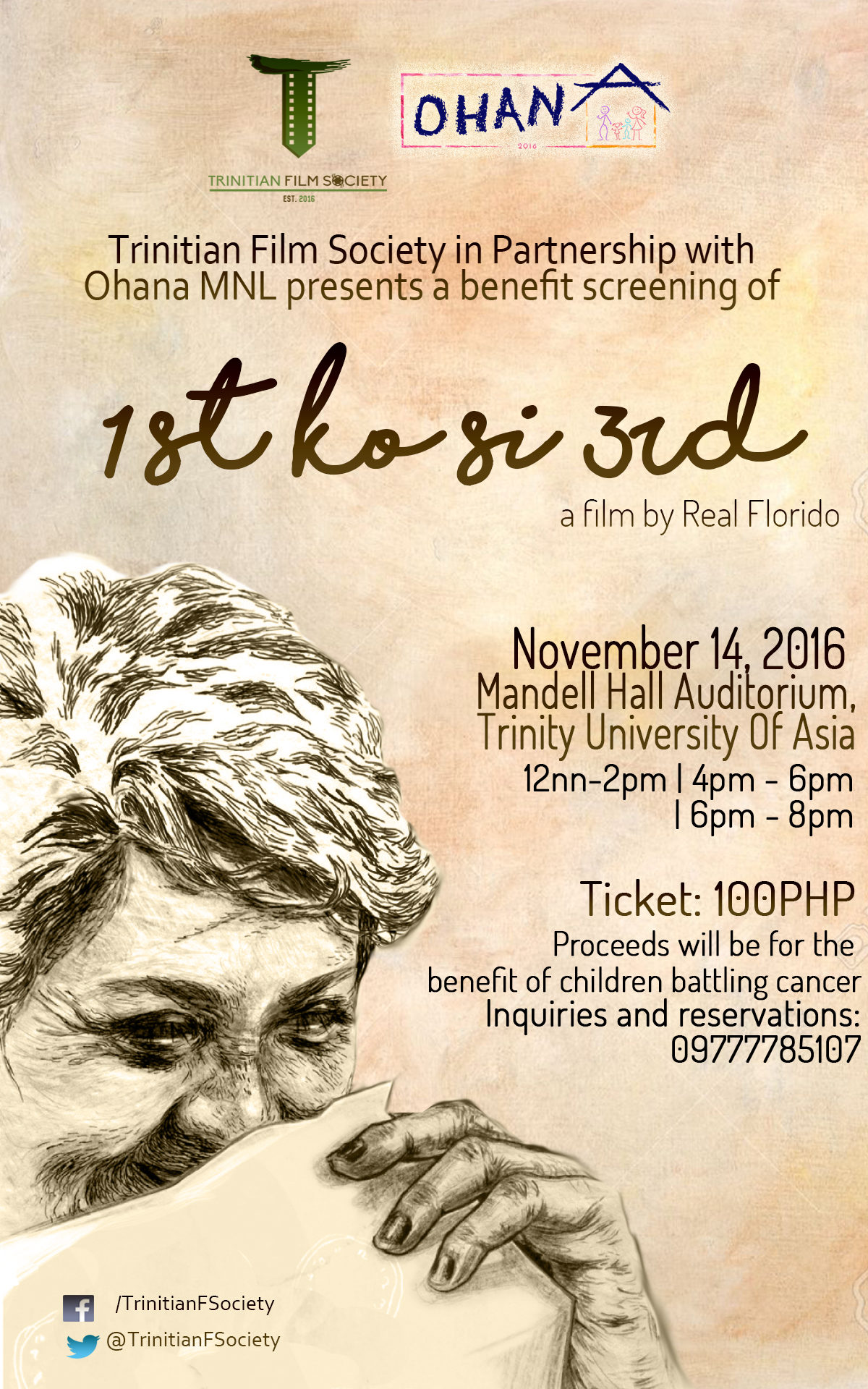 Posted at 16:12h in Films by Firestarters Production

MANILA, Philippines, October 30, 2016 – Ohana MNL partners with Firestarters Manila Productions to launch Love Is In The Hair, a series of events aimed to benefit pediatric cancer patients from the Philippine General Hospital and the National Children’s Hospital. The event started September 2016 with a hair drive, with Reyes Haircutters as their major partner, gathering locks of hair to be turned to wigs for the beneficiaries. Next in line are fundraising projects such as screenings of 1st Ko Si 3rd, an award-winning film produced by Firestarters Manila Productions Co. on November 14, 2016 at the Mandell Hall Auditiorium of Trinity University of Asia.

The film 1 st Ko Si 3 rd is an award-winning film by Real Florido featuring a story of rekindled love, by lead actors Nova Villa and Freddie Webb, after being separated for a very long time. The film received awards such as Best Actor for Dante Rivero at the 2014 Cinemalaya Independent Film Festival, Best Feature Film at the Canada International Film Festival, and Best Director for Real Florido at the London Film Awards 2014. Screenings will be held at partner universities.

On September 20, 2016, Ohana MNL together with partner salons and organizations nationwide, launched Love Is In The Hair, a hair donation drive which gathered locks of hair to be manufactured into wigs for the beneficiaries who suffer from hair loss due to cancer treatments. This November 2016, an exhibit showcasing photos of the beneficiaries wearing the donated wigs, and film screenings of the award-winning film 1 st Ko Si 3 rd will be held to raise funds for Ohana MNL beneficiaries.

The Love Is In The Hair project of Ohana MNL, aside from being a fundraising event, aims to raise awareness of pediatric cancer in the Philippines as well.

Ohana MNL is a start-up non-stock and non-profit organization aiming to promote social responsibility among the youth. Core members of the organization are alumni of the University of the Philippines, Pamantasan ng Lungsod ng Maynila, De La Salle University, and University of Santo Tomas. Ohana MNL started on January 2016, with quarterly projects focused on helping chlidren in need.