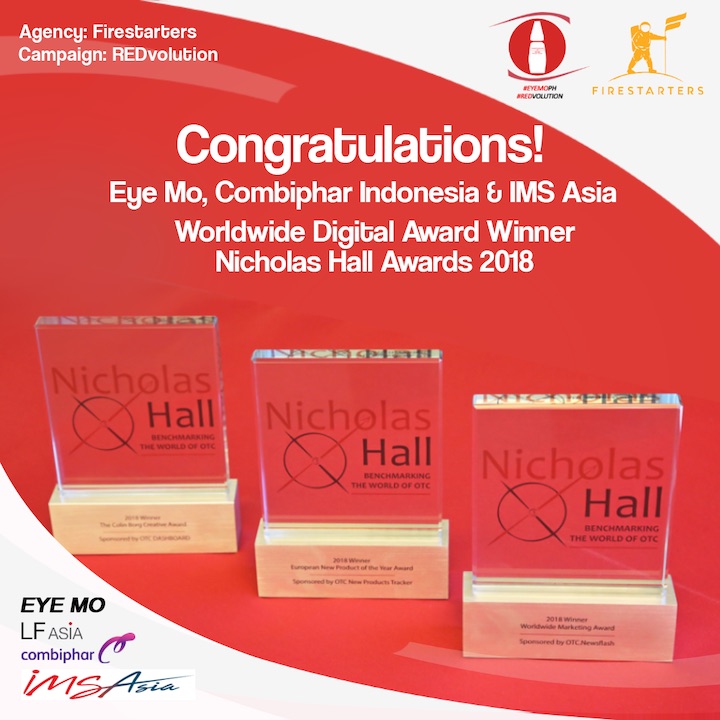 Posted at 05:52h in Uncategorized by Firestarters Production

SINGAPORE – Leading eye drop brand Eye Mo Philippines once again made history as it clinched a back-to-back win for the Philippines at the prestigious Nicholas Hall OTC Marketing Awards, a highly-coveted international accolade that seeks to reward the highest standards of innovation and excellence in marketing over-the-counter (OTC) medicines. 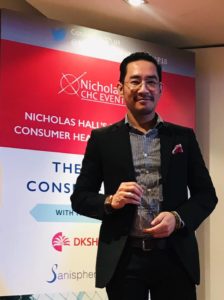 The Worldwide Digital Award recognized Eye Mo’s #REDvolution banner, a social statement operating under the Eyes Mo, Care Mo campaign, which sought to mobilize millennials in creating “positive change”. The campaign rallied the youth in joining a national crusade to improve the quality of life by taking better care of the eyes.

The #REDvolution movement heralded “red” as the color of love and care through Eye Mo’s Red Eyes Formula variant. Mainly utilizing digital platforms with sizeable support from offline channels, the nationwide campaign had an overall social reach of 25 million, with a 678,000-strong digital engagement. “Like its predecessor, this year’s #REDvolution campaign is moored to the National Eye Care Awareness Month (NECAM), Eye Mo’s pioneering initiative to introduce the country’s first awareness drive on eye care. Founded in 2017 and occurring on May of each year, NECAM aims to foster a stronger understanding of eye health and to address the growing need for eye care,” Earl Jayona, Eye Mo Philippines Sales and Brand Manager said in media interviews.

In the heart of the campaign is a social documentary that champions the brand’s credo of positive change. The documentary, uploaded on social media and shown in several adjacent events, features three influential millennials, each sharing uplifting stories of struggle and success: Norman King, 29, the first Aeta graduate of the University of the Philippines (UP); Nikko Ramos, 29, radio jock and sportscaster; and Claire Adorna, 24, one of the 29 Filipino gold medalists in the 2015 Southeast Asian (SEA) Games. The anthemic documentary aims to reawaken the youth’s self-belief and to use this newfound confidence in overcoming adversity.

Also part of #REDvolution’s digital efforts was an avante-garde Augmented Reality (AR) tool situated at select campuses in the metro. Augmented reality is an interactive experience that intensifies a viewer’s perception of reality by making use of their real-world environments that are then augmented with computer-generated effects. The campaign utilized the power of Facebook AR by creating a filter that encapsulates the brand’s core claims of relieving the five signs of eye irritation.

“We incorporated the use of AR in the #REDvolution campaign to engage the young audiences in our campus tour.  This is a fun and amazing strategy to communicate the brand message to its new target market – the young ones or the digital-natives. We made sure that the use of AR is well-integrated in the campaign to revolutionize eye care,” said Real Florido, Chief Creative Officer of Firestarters.

Also fortifying the campaign’s digital reach are influencer partnerships that promoted the #REDvolution movement through a series of viral social media and blog posts. Facebook live videos of radio and television interviews likewise contributed to the campaign’s strong social reach. This series of PR efforts were strategized and executed by young public relation practioner, Bettina Sandiego.

In rallying students, Eye Mo partnered with colleges and universities to mount a series of campus shows under EyeDucation, an initiative to educate the youth, in which the social documentary and AR tools were strongly integrated.

Eye Mo Philippines is joined by its global owners Combiphar Indonesia and IMS Asia in the brand’s core vision of bringing eye care awareness to the global market.