Iska, a loving but impoverished grandmother of an abandoned child tragicomically loses everything and turns into someone society reckons her to be. 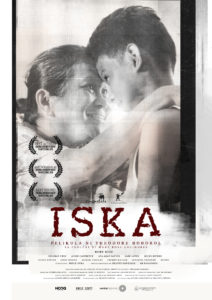 ISKA’s world is confined within the state university where she lives in a shanty and works as a photocopying lady Mondays through Saturdays; and as a laundry and cleaning woman on weekends.  She’s been married for 30 years to an alcoholic  womanizer whom she calls “Asungot.”  Her only daughter has left to her care her 10-    year old grandson, Dongdong, who is in autism spectrum.  She has been told to give up  her grandson to an orphanage, but she believes that the child should be given care by his own flesh and blood.

Until Iska is accused of maltreating her grandson, padlocking him inside a room, letting him go wild without food or any clothes on. She is tagged as an irresponsible and unfit guardian by the media and government, when all she wants is to ensure Dongdong’s  welfare. Despite dealing with life’s curveballs one after the other, Iska never loses her tenacity and will to survive.