Logline: While a deaf couple decides on what to do with their marriage after they separated, they learned that it is not the disability to speak that tore them apart. 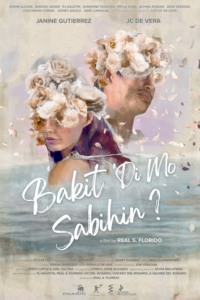 What is the vision of the film? What is the visual concept? What is it supposed to look and feel like? What is your connection to the project if you’re not the writer?

It amazed me how loud the deaf and mute people can be when they are together, an irony of how we usually define their case as people who can’t speak. With this film, I’d like to dabble into that world where no word is needed to say what you want and how you feel. And at the same time, it is harder to find resolve when you can’t find the right message to say or convey.

I would like to create a portrait of this unique story of two people.  I want to make a film that shows the beauty, pain and chaos of love in silence.

The visual treatment of the film is very crucial as it has two parallel timelines that the audience will be following: one is the current timeline when Migs left Nat; and the other is consist of pieces of his memories that made him re-evaluate his decisions on finally putting an end to their marriage. The current timeline would be somber, most colours are muted to reflect Miguel’s state of mind and emotions. The fragments of memories will be visualised based on the couple’s emotional journey. This shall give the audience an unpredictable experience as they witness different scenarios on the lives of Miguel and Nat in the course of their marriage.

When I first heard about this real-life story, I got immediately curious on how to translate this painful yet beautiful tale about marriage. So I started working with the script together with the help of a first-time screenwriter.  After, months of working on developing the script, we were able to churn out a story that we believe strikes a universal chord.