Posted at 05:25h in Uncategorized by Firestarters Production

MOR 101.9 For Life’s DJ Nicki Morena literally lit up the fun and laughter at the last variety show of CAMSUR’s Kaogma Festival 2019 held last Sunday, May 26 at the University of Northwestern Philippines that housed 10,000 people. The said variety show wrapped up the week-long festival that is celebrated every year and has turned into a much-anticipated event in the province of Camarines Sur. The said festival was previously known as, Koagma Mardi Gras: The World’s Hottest Festival, which in local dialect means to “a good time”.

Kaogma, is a celebration that lasts for 10 days and it expresses culture, history and the individuals. The festival features numerous cultural activities such as, Exposition, Sports events, Beauty Pageant, and a singing contest, by which the series of events is a perfect opportunity to show CAMSUR’s local and raw talents. 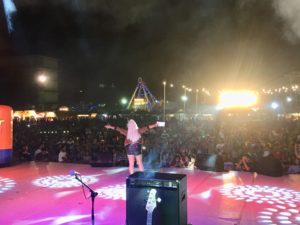 In the said variety show, DJ Nicki Morena, hyped the crowd with her witty remarks and easygoing attitude alongside OPM Bands such as December Avenue, IV of Spades, the winners of Mr and Miss Kaogma 2019 and also the winners of the Big V, which is a singing contest that had the best singers of CAMSUR. Nicki’s natural sassiness and humorous boldness connected well with the audience that there was even a time when all ten thousand audience jumped up and down in unision when she hollered and requested for a big might cheer from them. She said, “Grabe talaga ang mga Bicolanos! They know how to have fun! Hindi na ako masyado um-effort sa pagpapasaya sa kanila dahil masasayahing tao sila but seeing all of them responding to my quicks and antics – wow – nakakataba ng puso!”

“There was even a time when I asked them to clap for me as if I was Liza Soberano. Akala ko mawa-waley ako sa kanila pero sobra yung dagundong ng palakpalakan at hiyawan when I said that joke!   By the way this is my second year hosting Kaogma kaya I am so happy !!!” DJ Nicki Morena added.

Indeed, Kaogma Festival is a beautiful experience for her and the whole of CAMSUR.